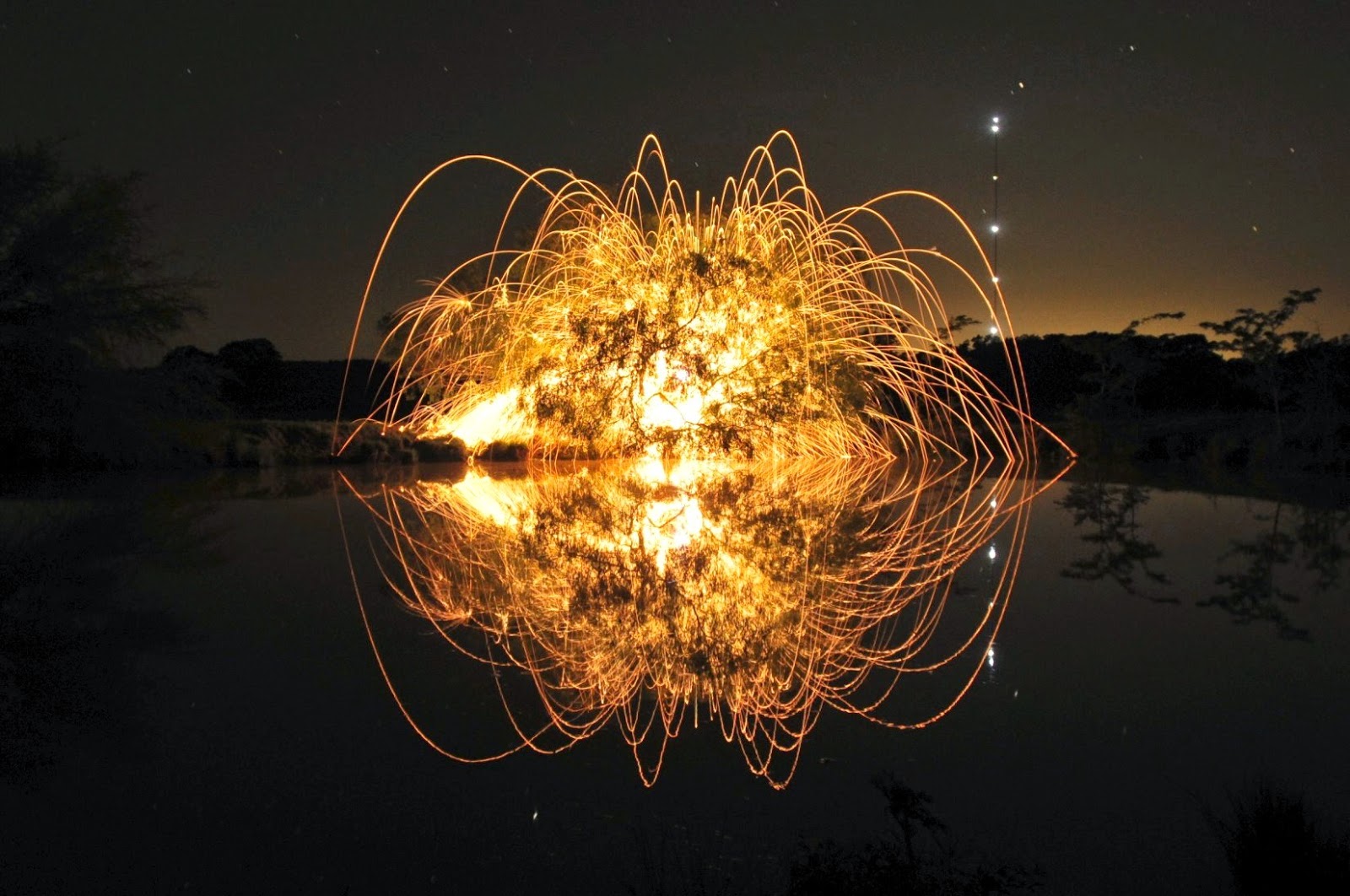 In the flaming bush
you promised deliverance to your people, O God,
and in the cross of Jesus
you embraced our suffering and pain.
In times of misery,
show us the transforming power of your love
that we may know the hope of your glory.
Amen.

Prayer & Image Credit
Posted by Unknown at 6:59 AM No comments: 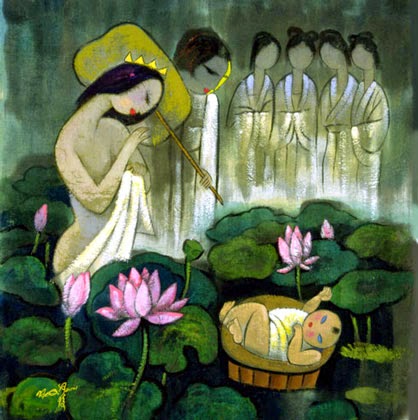 God of Miriam and Moses,
you are our help from age to age.
Accept our worship, our living sacrifice,
and transform us by your Spirit,
that, being many members of one true body,
we may dare to pray together
in the name of Christ the Lord.
Amen.

Prayer & Image Credit
Posted by Unknown at 6:44 AM No comments: 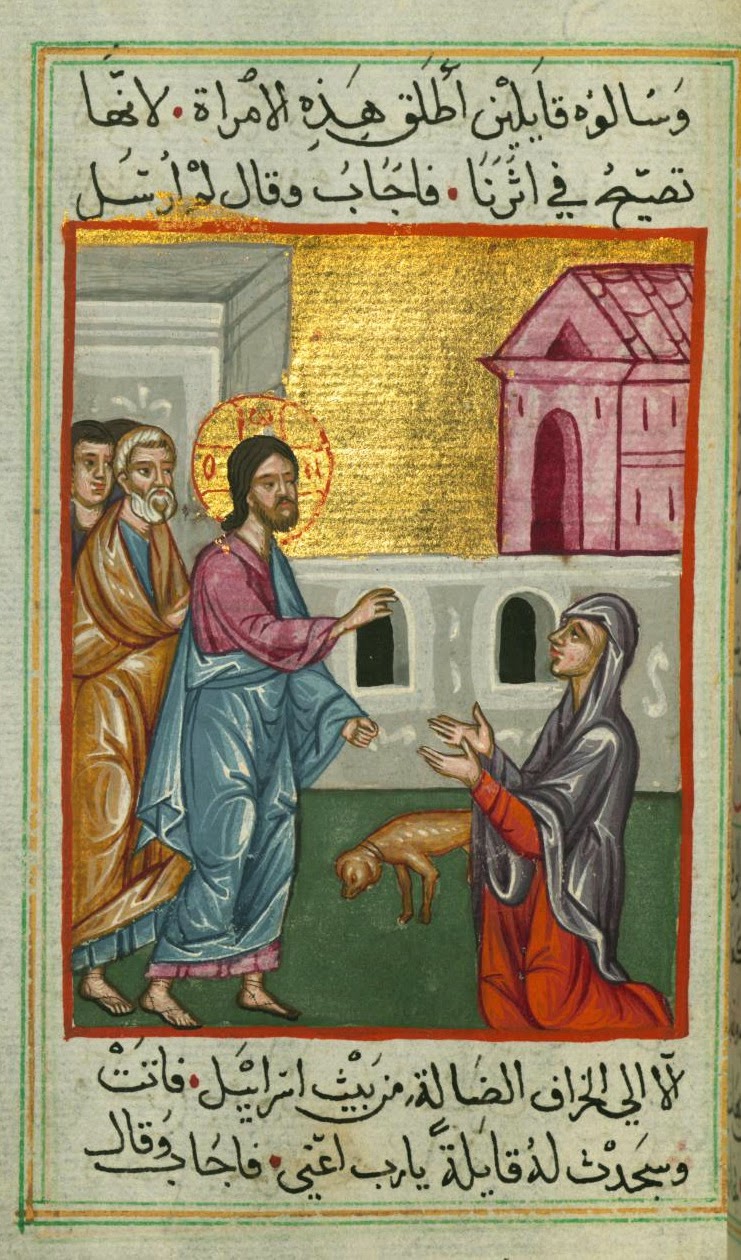 Holy One of Israel, covenant-keeper,
you restore what is lost,
heal what is wounded,
and gather in those who have been rejected.
Give us the faith
to speak as steadfastly as did the Canaanite woman,
that the outcast may be welcomed
and all people may be blessed.
Amen.

Prayer & Image Credit
Posted by Unknown at 7:03 AM No comments: 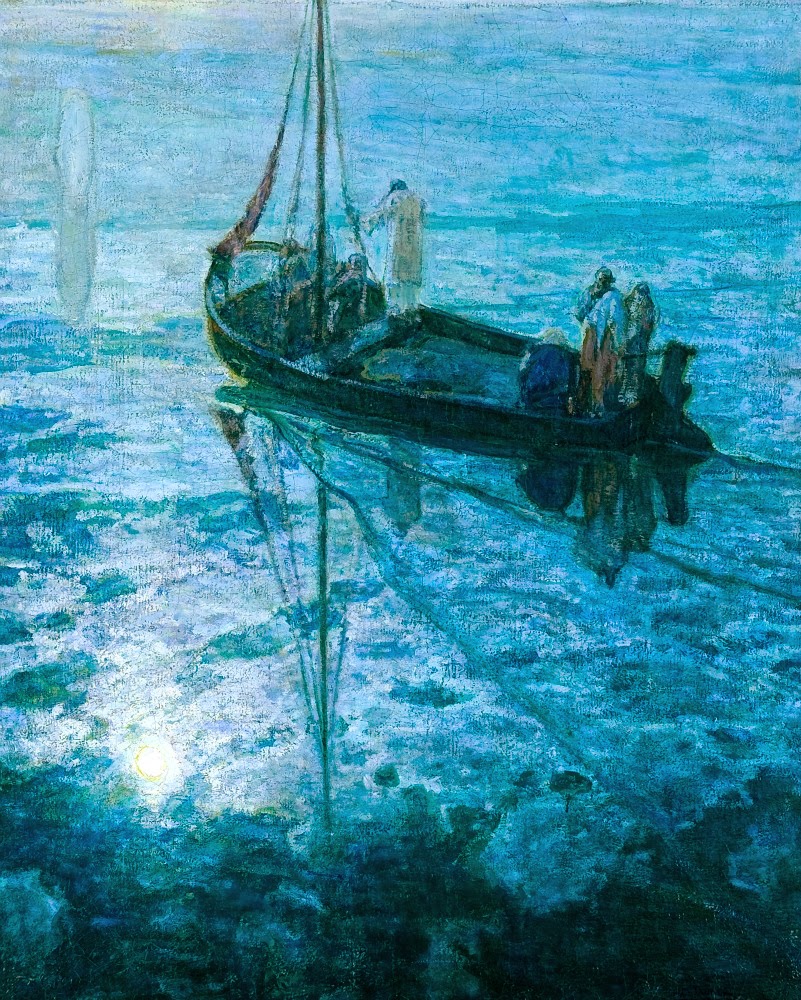 God of awe, from whom we flee in holy terror:
your silence burns like ice;
your whisper cuts through fear;
we long to hear your faithful word
of righteousness and peace.
Bless us with bold belief
even in the darkness of the night
and the assault of life's storms,
that we may be messengers of your justice,
in the name of the One whom wind and wave obey.
Amen.

Prayer & Image Credit
Posted by Unknown at 7:05 AM No comments: 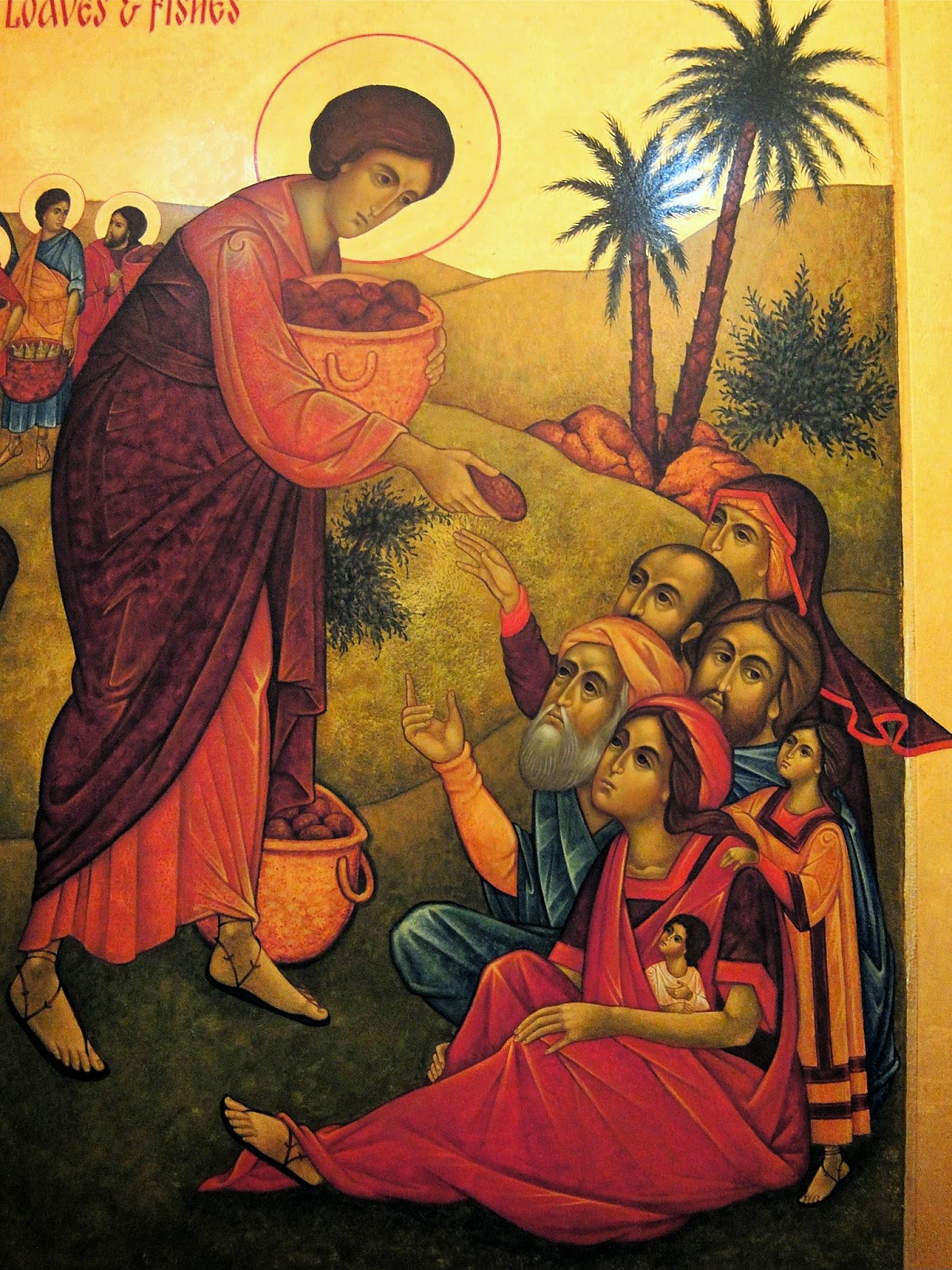 Glorious God,
your generosity floods the world with goodness
and you shower creation with abundance.
Awaken in us a hunger for food to satisfy both body and heart,
that in the miracle of being fed
we may be empowered to feed the hungry in Jesus' name.
Amen.

Prayer & Image Credit
Posted by Unknown at 10:17 AM No comments:

I can't believe July went by so quickly. There's still so much I want to accomplish in 2014 and there's only 5 months left! I wanted to write this post to check in on how July went with my goals for the year.

~Keep a daily journal.
Continuing to stay strong with this goal and in fact, I'm converting others to the Bullet Journal system I'm using. If you haven't checked the system out, you definitely should!

~Continue keeping a list of the eucharisteo/gifts/joys/Thanksgivings in my life.
I'm doing this in my daily journal. I'm over 3,500.

~Read at least one non-fiction book each month of 2014.
1 ~ Girl Meets God: On the Path to a Spiritual Life by Lauren Winner ~ completed 5-January-2014
2 ~ Almost Amish: One Woman's Quest for a Slower, Simpler, More Sustainable Life by Nancy Sleeth ~ completed 18-January-2014
3 ~ In Praise of Slowness: Challenging the Cult of Speed by Carl Honore ~ completed 9-February-2014
4 ~ Organized Simplicity: The Clutter-Free Approach to Intentional Living by Tsh Oxenreider ~ completed 16-March-2014
5 ~ Confessions of a Prayer Slacker by Diane Moody ~ completed 4-April-2014
6 ~ The Knitter's Life List: To Do, To Know, To Explore, To Make by Gwen W. Steege ~ completed 3-May-2014
7 ~ The Organized Kitchen: Keep Your Kitchen Clean, Organized, and Full of Good Food-and Save Time, Money, (and Your Sanity) Every Day! by Brette Sember ~ completed 17-May-2014
8 ~ I Thought It Was Just Me (but it isn't): Making the Journey from "What Will People Think?" to "I Am Enough" by Brene Brown ~ completed 29-June-2014
9 ~ The Yarn Whisperer by Clara Parkes ~ completed 9-July-2014
10 ~ Notes from a Blue Bike: The Art of Living Intentionally in a Chaotic World by Tsh Oxenreider ~ completed 22-July-2014
11 ~ Junia Is Not Alone by Scot McKnight ~ completed 28-July-2014
12 ~ Flunking Sainthood: A Year of Breaking the Sabbath, Forgetting to Pray and Still Loving My Neighbor by Jana Riess ~ currently reading

~I plan to continue sharing about the creative part of my life which includes knitting, spinning, and designing patterns on a month to month basis here on my blog. Hopefully that will include sharing about designing at least six knitting patterns, knitting at least two sweaters for myself, knitting at least six pairs of socks for myself, spinning at least five batches of fiber, knitting several preemie hats to donate to charity, and who knows what else!
So far, I've completed:
*Design Projects ~ 4
*Cowls ~ 5
*Gloves ~ 1
*Hats ~ 20 (19 of them are preemie hats for charity)
*Shawl ~ 2
*Socks ~ 18 (4 are new designs, 5 of them are for me, 9 are gifts)
*Sweater ~ 1
*Washcloths ~ 5
*Misc. Items ~ 2
*Spinning ~ 5
TOTAL ~ 59 projects completed in 2014

Stripey Hitchhiker ~ From the pattern by Martina Behm. Knit on US5 (3.75mm) needles with CJKoho BFL Top Handspun in the Liberty and Justice (for all) colourway and Brigantia Luxury Yarn Double Knit in the 8100 colourway. I won the handspun from my sweet friend Vicki's Dragonfly Soars podcast. It wasn't enough to knit this pattern, so I striped it with the Brigantia and I absolutely adore how it turned out!!!!!! 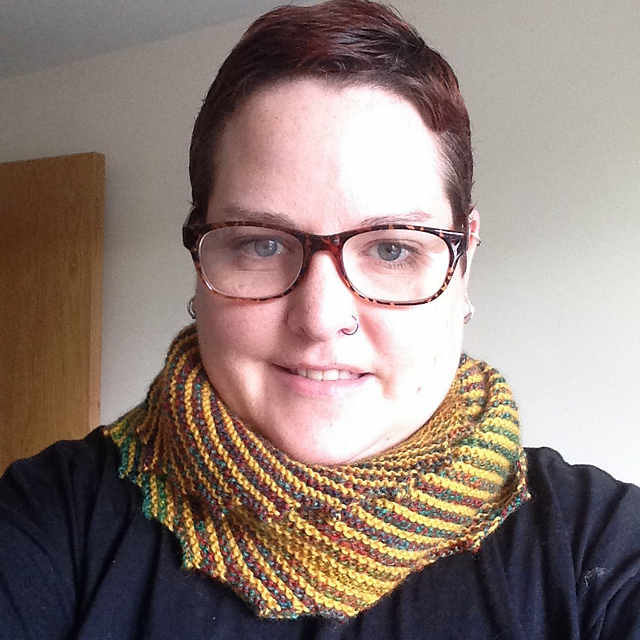 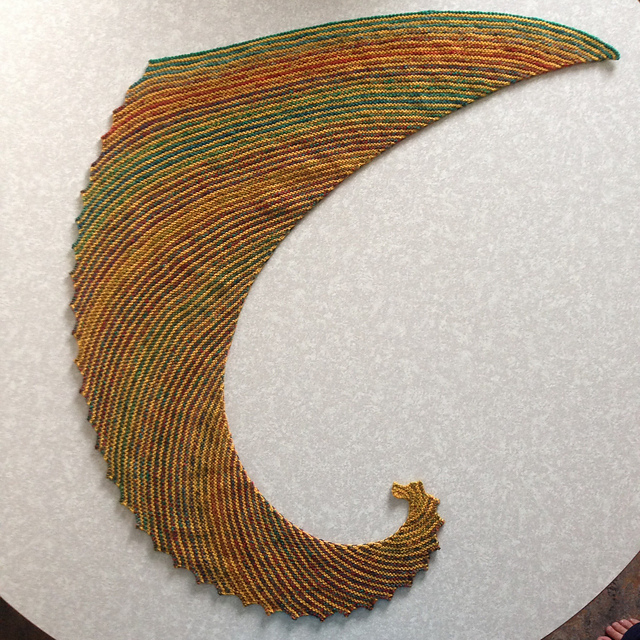 My Cane Didn't Want to Be Naked Anymore 2 ~ From the pattern I designed which is available for free on Ravelry here http://www.ravelry.com/patterns/library/my-cane-didnt-want-to-be-naked-anymore. Knit on US6 (4.0mm) needles with King Cole Merino Blend DK in the Silver + Dusky Pink colourways. As you know if you follow me other places online and/or watch our podcast, I'm walking more (I want to get rid of the wheelchair if at all possible), so I decided my cane needed a new cozy. I modified the pattern a bit this time - instead of doing a ribbing at the bottom for over the stopper, I instead removed the stopper, did a kitchner stitch, and replaced the stopper over it. It's staying in place so much better than with the ribbing. 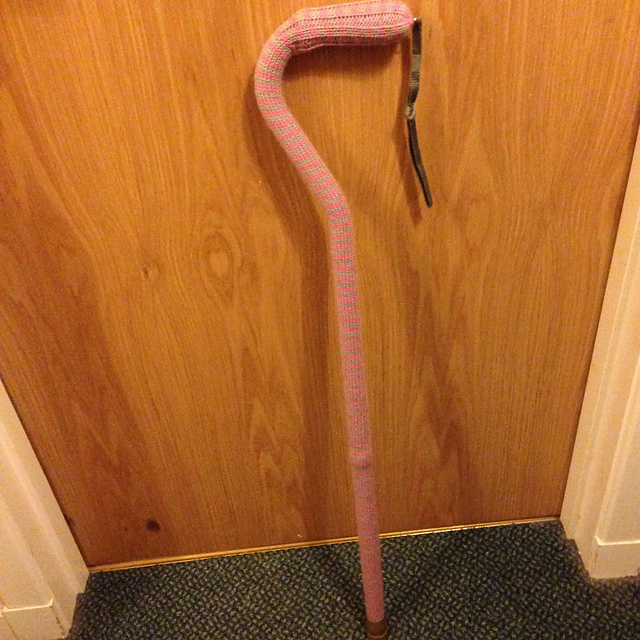 If you're my sister, scroll quickly and don't read this next part. LOL!
Birthday Socks for Lola, Birthday Socks for Wyatt, + Birthday Socks for Waylon ~ Used the measurements from the pattern by Jane Richmond, but modified the pattern to get the look I wanted. Knit on US1.5 (2.5mm) needles with Knit Picks Stroll Tonal in the Harvest colourway. I wanted to get all 3 pairs of these socks done at once so I could ship them back to the US together (versus higher shipping cost for shipping them separately) to my Momma for my niece and nephews birthdays (one in September + the other two in December). They've arrived safely and I can't wait to see their faces when they receive them. 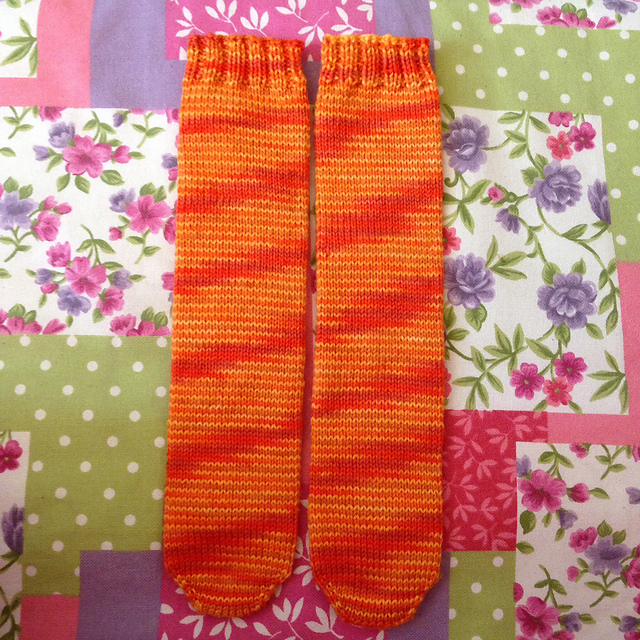 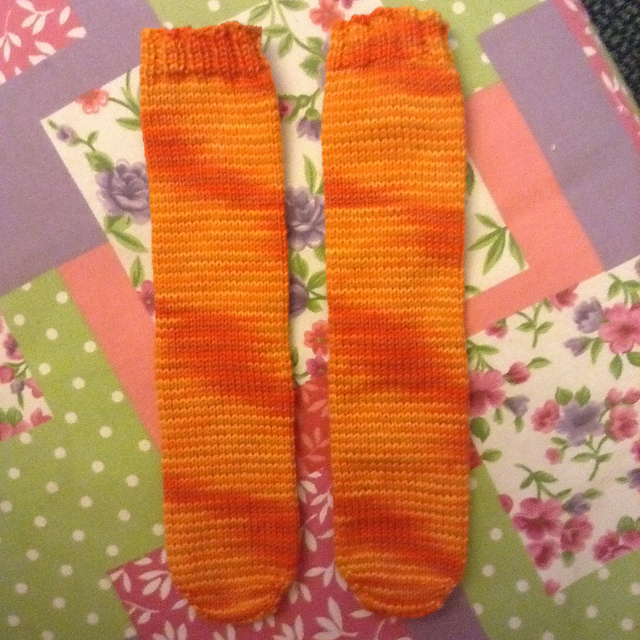 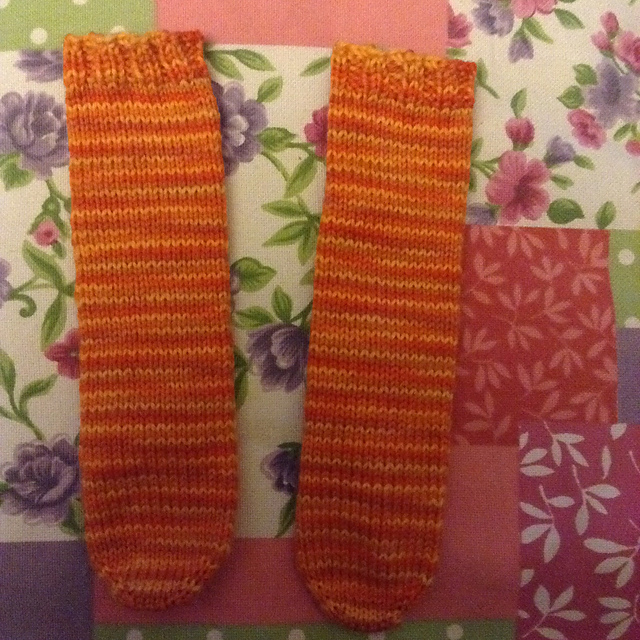 #TheAlmonsTakeLondon Socks ~ Just a plain vanilla sock with the Fish Lips Kiss heel. Knit on US1.5 (2.5mm) needles with Trailing Clouds Nimbus Self Striping Sock in the Mind the Gap colourway. As you've probably already seen, we spent almost a week in London in July. How could I not knit with this sock yarn that was dyed with the colours for the 12 lines of the London Tube. I didn't quite finish the socks before our holiday was over, but finished the last half of the 2nd sock after we returned home. I love, love, love these socks! 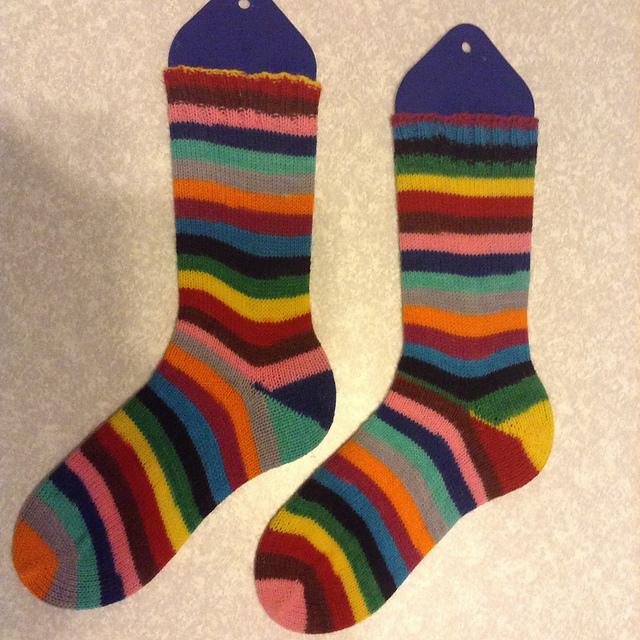 It's Not Magic, It's a Sock Blank! Socks ~ Just a plain vanilla sock with the Fish Lips Kiss heel. Knit on US1.5 (2.5mm) needles with Easyknits.co.uk Sushi Sock Roll in the Lovely Lydia colourway. I purchased the sock blank (ok, let me explain for those who don't know, what the dyer did was take a machine knitted piece of fabric, dyed it in a gorgeous gradient colourway, and then sold it to me; I think knit from the fabric by unravelling it as I knit) at Unwind Brighton which was a fibre festival we went to while we were on holiday in Brighton which is south of London. It was definitely a unique experience to unravel to reknit the fabric as something else. I still have quite a bit of the center portion of the gradient left over, so I'll use it for another pair of socks. 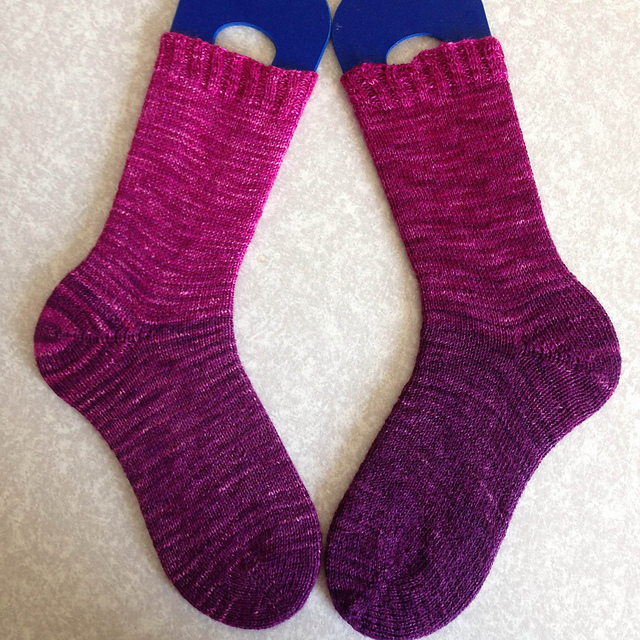 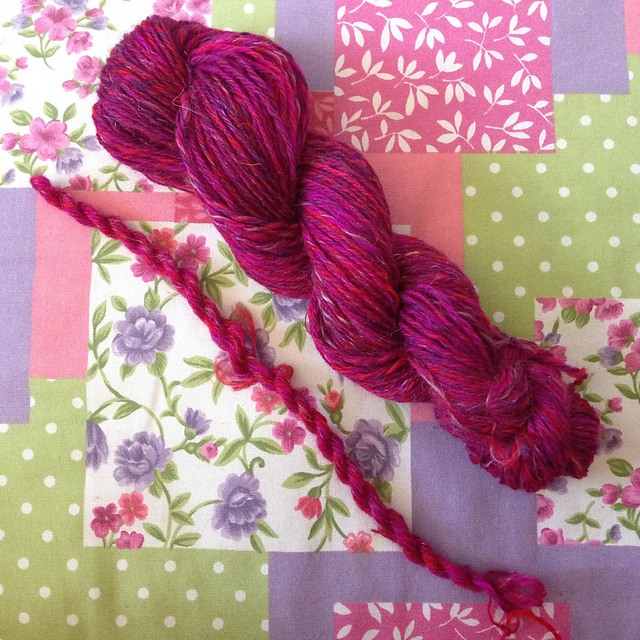 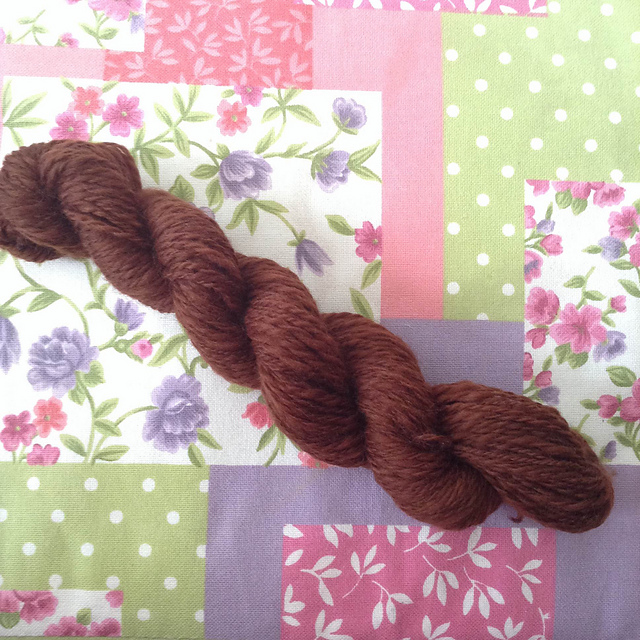 Design Projects
*Spoilers Socks (Doctor Who Inspired) ~ completed 1-March-2014 ~ this pattern which was inspired by Doctor Who's River Song was exclusively released to members of the Doctor Who Companions Sock Club on 25-July-2014 and will be available for the general public to purchase on 18-January-2015 on Ravelry at http://www.ravelry.com/patterns/library/spoilers-socks-doctor-who-inspired 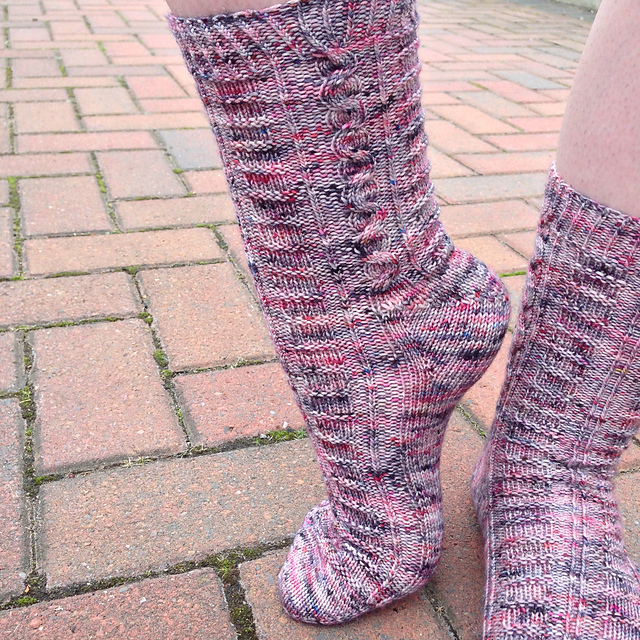 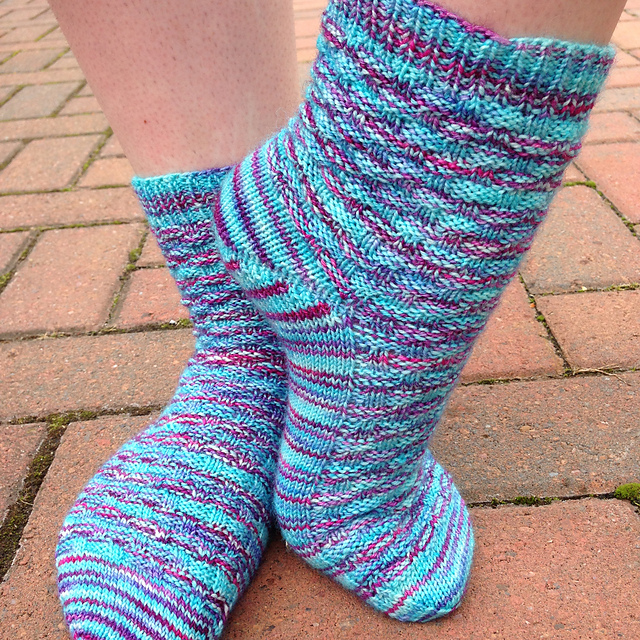 Thanks for journeying with me during 2014! I'll talk to yall next month with an update on my progress for August.

Email ThisBlogThis!Share to TwitterShare to FacebookShare to Pinterest
Labels: Carrie, Damaris, Everything Else, Family, Fibromyalgia, Gratitude, Holidays, Knitting, Lola, Photos, Russ, Scotland, Waylon, Wyatt
Location: Edinburgh, City of Edinburgh, UK
Newer Posts Older Posts Home
Subscribe to: Posts (Atom)
The Eternal your God is standing right here among you, and he is the champion who will rescue you. He will joyfully celebrate over you; he will rest in his love for you; he will joyfully sing because of you like a new husband. ~ Zephaniah 3:17